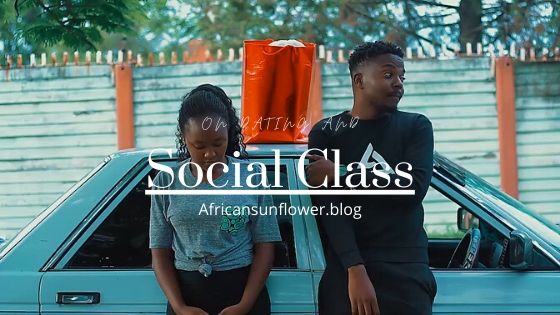 My last blog post sparked so many interesting conversations y’all!! I got so much engagement that I’ve decided to turn this into a mini 4-part series on money and relationships – as long as you promise not to shoot the messenger haha. As you can tell from the title, this topic is going to be equally as controversial… but then again, did you expect any less?

We all saw what unfolded in the 1st season of the new Zimbabwean TV series, Wadiwa Wepamoyo (if you haven’t been watching it, sweetie what is you doing?). Tawanda, a talented and aspiring football player who lives with his sister in a poorer part of Harare, meets a young Noku at a neighborhood borehole, and there their love story begins.

Long walks and frugal picnic dates chronicled their relationship, and in one episode we watched Noku ask, “But Tawanda, when are you going to take me out on a real date? Or at least buy me flowers.” We reminisced about our own young love stories as Man Tawa scrapped together what few coins he had in an attempt to please Noku and take her out to the movies, and we were brought pretty close to tears as he tried to impress her by borrowing his best friend’s shoes to better his appearance… but all of this came crashing down when Noku’s ex reappeared in the picture.

Although he had ghosted her a long time ago without any explanation, Tendai comes back into her life with no other intentions but to sweep (or rather, drive) Noku off her feet and win her back. Simply put, our first impression of him is that he, similarly to Noku, is a lot more well-off than Noku’s current man – he has a car, he always shows up well-dressed, and even comes bearing gifts for her. Like clockwork, we see Noku begin to distance herself from Tawanda as she decides instead to pursue a relationship with her ex, and the season finale now has us questionning which side of the love story will prevail.

Now why did I go to such lengths to recount this story, you may ask? The truth is, I’m intrigued by how much social class can be a hidden, but impelling force in relationships. Look around at the social circles you maintain. How much of a variance is there between you and your mates’ financial upbringing? I don’t want to generalise, but it’s probably an immaterial amount. This may not even be by choice; but the kinds of people we are exposed to on a frequent basis are usually decided by what schools we went to, the places we socialise at, or even where we choose to do our shopping. Ask me, I’m Zimbabwean. I can tell you a lot about classism!

Moreover, even when we do have a choice, it seems to be in our nature to simply gravitate towards other like-minded people whom we don’t necessarily have to explain ourselves to or tiptoe on eggshells around (cue Noku). This is especially the case for people who have lived in very sheltered homes where their only exposure to people less fortunate than themselves came from being around the scholarship kids in high school or from the minimal interactions they had with their helpers at home.

When I created an Instagram poll about whether or not people thought it was important to only date other people who are from the same/similar financial backgrounds as themselves, an overwhelming number of people (70% to be exact) said this was not an important factor to them when dating. Funny enough, however, my DMs were flooded with different anecdotes of failed relationships and the simmering resentment from love that was soured by the disparities in childhood upbringings and lifestyle differences between their partners and themselves.

One can easily deduce therefore, that social class can be one of the less-obvious but rather persistent speed bumps in modern-day relationships. Going on dinner dates and experiencing new adventures with your partner suddenly becomes less appealing because it somehow always results in an argument about how such things are a waste of money and there is no need to be so ‘flashy’ in your relationship. One person even mentioned how awkward general conversations became because their person was always sensitive and defensive when the topic of money was discussed in their relationship.

A significant number of friends also highlighted that the issue was mostly brought up during heated arguments, when the ‘less wealthy’ (for lack of a better term) partner would sometimes use their difference in status as an attack to show how “pampered”, “spoilt”, and “immodest” the other person was. Ouch. Undoubtedly, the varying mindsets about financial issues within the different social classes, can really put an unusual strain on relationships that would not otherwise exist between two people who come from similar upbringings. This is a fact which most people might take lightly until they’re placed in that kind of situation because they’re not faced with the choice and the challenges of dating someone who has had a different upbringing than theirs every single day, as a result of their closed social circles.

However, we have to address the problem, too, with solely sticking to your own social strata and the consequences of which we are now seeing today: a largely capitalist society where the rich continue to get richer and the poor keep getting poorer. Back in the day, it was normal for an aristocrat to marry his secretary or subordinate, and thus, an entire generation of would-be working-class people had the doors of opportunity open up for them to accumulate more social capital and elevate themselves within society. With the way things stand at present, people with degrees and PhDs are also only marrying people with degrees and PhDs, and there is less mixing between the social classes.

Without delving too deep into this process, I honestly think that, while it may be the easier/smoother route to be with someone who easily understands your social nuances and lifestyle choices, there is something to be said about stretching yourself within a relationship and being able to build something out of what seems like nothing. Truthfully, one’s past doesn’t necessarily determine their financial mindset, and you might find that there are still huge barriers between the way you and a person who grew up in similar conditions to you, perceive and prioritise financial issues.

It’s more important for the two of you to be able to agree on the fundamentals of what your future financial goals look like as a couple. If you see this person being in your future for real, your partner having less than you did growing up should be an opportunity to learn crucial lessons that can stand as the foundation for what you should and shouldn’t do when building your home together. As long as it doesn’t get in the way of you being authentic and maintaining solid reasoning, in my opinion, everyone needs to experience at least one relationship in which they are forced to dig deeper and step outside of their known social circles. No matter which side of the social spectrum you reside on.

Who do you think will win in this game of love? My vote goes to Tawanda! As usual, thanks for reading loves; any comments and feedback are always welcome! Don’t forget to follow my IG (@african_sunflower) for all of my storytimes, makeup, and hair tutorials, and you can also catch up with my latest post here.

One Reply to “On Dating and Social Class”

This site uses Akismet to reduce spam. Learn how your comment data is processed.